The Eltham Concert Band is a community band based in Eltham in the Shire of Nillumbik in the North Eastern suburbs of Melbourne (Australia). We are partly supported by the Shire Council and we perform for a wide range of community service groups and in various community functions such as: The Nillumbik, Warrandyte and Banyule Festivals; Council functions and Judge Book Village events.
Eltham Concert Band has a proud history of providing enjoyable music making for the players as well as exciting entertainment for the community. The Band celebrated its 40th anniversary in 2015. Several of the members have been with the Band for most of that time.

On May 29th the band had its first concert in two years. We had a really good audience, and I think that it was enjoyed by all. So we were a little worried that we might not be able to better for our second concert which was on October 16th. But I think we did.

We will be performing at the Warrandyte carols, but out next major concert at the ECRC is May 21 2023 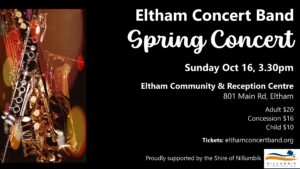